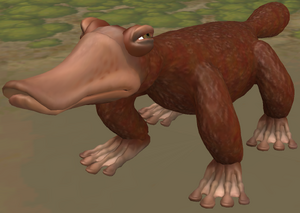 SPORE Universe
The Anatinus is a herbivorous, semi-aquatic creature that can be found within the SPORE Universe. It holds a strong resemblance to the real life Earth Monotreme, the Platypus. In fact, it's name is based on the scientific name of the Platypus - Ornithorhynchus anatinus.

The Anatinus has a stocky body with small legs, making its body low to the ground. Its head is made up of a large duck-like beak, and its body is covered in brownish fur.

While docile most of the time, and herbivorous, it does hold a strong defense mechanism in the form of venom spurs on the back legs. If confronted by a predator, it can inject its attacker with a strong poison, strong enough to kill small creatures, and incapacitate larger animals.

Retrieved from "https://aliens.fandom.com/wiki/Anatinus?oldid=170636"
Community content is available under CC-BY-SA unless otherwise noted.