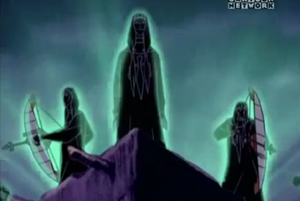 Jonny Quest Universe
The Anasazi or the Ancients are an alien race that appear in The Real Adventures of Jonny Quest.

They were humanoid dressed in illustrious robes and elaborate headdresses.

The Anasazi were an ancient people that visited Earth, bringing knowledge and wisdom to the Native American people. However when mankind began to misuse their gifts, the Anasazi retreated from their visitations. However before leaving the benevolent race left apecial quartz to their most trusted followers, so that their children may contact them to call upon the Anasazi.

However on one such visitation, an Anasazi ship was shot down by the US Airforce over Roswell, the government agents salvaged what was left of the alien's ship created stealth capable helicopters. When the government learned that the aliens were being summoned by Alice Starseer, using the crystal artifact, they attempted to steal it and use it to lure the aliens to them to acquire their advanced technology.

The government agents plans were foiled by the Quest Team and with the assistance of the Anasazi who held the rogue agents at bay when they arrived. After Alice Starseer reunited with her grandfather who joined the Anasazi years ago, she invited the Quest Team to join them but they declined as their were still mysteries left on earth to discover.

Their ships were capable of traveling 1000 miles in an instant. For defense, they possessed bows that shot advanced arrow-like projectiles.

Retrieved from "https://aliens.fandom.com/wiki/Anasazi_(Jonny_Quest)?oldid=154551"
Community content is available under CC-BY-SA unless otherwise noted.