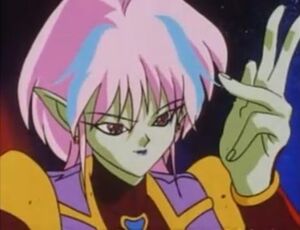 An is one of the two main antagonists during the Makaiju arc of the second season of Sailor Moon R. She resides on the Makaiju and the Juuban Odyssey apartments.

She dislikes Usagi stealing Mamoru from her and the Sailor Senshi.

In her normal alien form, An has dark, hot pink eyes, light green skin (like most (traditional) aliens are), blue lipstick and long light pink hair with some blue highlights. She wears suit-like clothing similar to Ail's, but hers is more snug. She wears heeled boots.

In her human form as Natsumi Ginga, she has, by human standards, normally toned, albeit pale skin, red hair that falls just past her shoulders, and brown eyes.

Anne often loses energy, and must recover it either by going to the Doom Tree or draining someone's vital life energy. Usually she is the one who chooses the Cardian they send to do their bidding.

Ail and An invaded Earth to drain energy for the Makaiju, and targeted the energy of humans, as they have the type of energy that the Makaiju needs. While they were posing as humans at Usagi Tsukino's school, An fell in love with Mamoru Chiba. She kept this from Ail, while initially unaware that he was in love with Usagi. However, they soon suspected each other in episode 4 (Usagi's Crisis! The Tiara Doesn't Work), when An took Mamoru to the virtual reality game, and Ail caught Usagi when she fell off a platform.

In episode 10 (Steal Mamoru's Kiss! An's Snow White Strategy), when the Sailor Senshi were arguing over who is going to play Snow White in the play, An had them all draw strings, and cheated so that she was Snow White, since Mamoru was Prince Charming and An wanted to kiss him so he would fall in love with her. However, the play was crashed by Ail and Cardian Bipierrot.

In episode 11 (Be Careful After School! Usagi is Targeted), An complained about poetry and spoke of it in an alien language when Miss Haruna asked her to read a poem, so she got detention with Usagi. She began losing energy, so she continuously attempted to steal Usagu's energy, and finally succeeded. However, Usagi was still able to destroy Ail's disobedient Cardian, Amanju.

In the thirteenth episode, Alan and Anne had fought the Sailor Senshi, but An protected Mamoru from the Doom Tree. Though Ail soon came to realize that what they were doing was wrong, An initially did not, nor did she realize the true power of love, until the Makaiju tried to kill Ail. An sacrificed herself to save him, being impaled by its branches. After the Doom Tree explained to everyone that it was never evil, and needed love energy to survive, the Makaiju brought An back to life. Together Ail and An, who have rekindled their stronger and closer sister-brotherly love, left to start a new peaceful life with the healed and revitalized Tree of Life.

Ail and An
Add a photo to this gallery
Retrieved from "https://aliens.fandom.com/wiki/An?oldid=168679"
Community content is available under CC-BY-SA unless otherwise noted.