Alien Species
Register
Don't have an account?
Sign In
Advertisement
in: All Tomorrows Universe, Spacefaring Civilizations, 2008 Debuts,
and 8 more 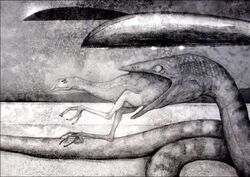 Unknown, but no less diverse than the posthumans'

Probably extinct by the time of the Author

Nemo Ramjet
The Amphicephali were a sapient species and the second extraterrestrial civilization that made contact with humanity in the form of the Empire of the Asteromorphs, Terrestrials and Subjects.

As the new empire was spanning the whole of the milky way, the humans tried to make contact with the indigenous folk of the surrounding nebulae, while still being cautious because of their history with alien invasions, remembering the Qu and perhaps the invaders that attacked the Bug Facers.

After a time, they found another civilization in the form of a diverse empire ruled by the Amphicephali. These were creatures resembling giant serpents with a head on each end. One of the heads contained a second body with arms and another head that was used to manipulate objects and interact with their environment.

Like the posthumans, the Amphicephali had a rich and diverse history and were cautious, but both species finally proved to be mature enough to make contact peacefully. They were the first species to peacefully make contact with humanity, but not the last.

Together, the united galaxies eventually destroyed the Qu, cradled their suns with artificial shells, criss-crossed interstellar space with wormholes and made travel a thing of the past.