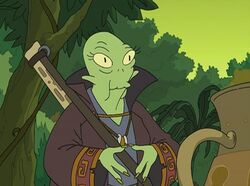 Futurama
Amphibiosans are humanoid creatures that are smaller and lankier than the average Human.

They resemble amphibians on Earth with whom they share some basic traits. They have no hair and possess only three fingers on each hand and two toes on each foot. Their skin color is a light green, and their slanted eyes are greenish-yellow with slit-like pupils. Amphibiosans have no noses to speak of, but possess two nostrils, and the ears are set quite low on the head and stick out a bit. The mouths are like lipless beaks. Their blood is green - possibly indicating a sulfur-based blood system, and they have no bones; Their physical frame is supported by a makeshift endoskeleton consisting of a system of high-pressure liquid-filled bladders. The only known difference between males and females is that the females have eyelashes; both genders are capable of giving birth. Their social structure is clan-based, and their home planet is an important member of the Democratic Order of Planets (DOOP).

Amphibiosans have three distinctive phases in their life cycle that they go through, the tadpole, the "bulboid" and the swarm of hookworms. Amphibiosans bear their young inside their bellies like mammalians until they are ready for birth. The post-birth life of an Amphibiosan begins in the swamp of their clan's birthing grounds. The parent gives birth on the shore to several dozen or hundreds of tadpole-like offspring which make their way towards the water, a dangerous phase in which their lives are threatened by predators. The role of the smizmar in this part of the process is to protect them on their short journey.

The next twenty years are spent in the water, until they mature into children, sprout legs and crawl ashore. According to the Grand Midwife, this phase is called a "bulboid". From there, the life cycle seems to be similar to that of Humans until it nears its end; at old age, Amphibiosans morph into a swarm of flying hookworm-like organisms, though they appear to retain a single conscious mind. When an Amphibiosan dies, it continues to feel pain for up to 6 hours after death, as according to the Old Farmer's Wikipedia, indicating that their brain activity continues on a low level and their cells do not instantaneously perish upon bodily demise.

Amphibiosan reproduction differs from that of Humans in a number of respects. Most notably is the fundamentally different reproductive strategy. Where humans, like all mammals, employ a K-selection strategy, having a small number of offspring they care for and protect closely, Amphibiosans employ R-selection, having a huge number of offspring which are left to fend for themselves, like the Omicronians, Decapodians or terrestrial amphibians. In addition, while Amphibiosans reproduce sexually, combining the genes of two parents to produce offspring, this process is considerably more flexible than in Humans and many other sexual species. An Amphibiosan needs only come into contact with genetic material from an individual to become impregnated, and this individual does not even have to be a member of the same species. Reproduction also requires a smizmar, who may or may not be the biological parent of the children, but is regardlessly viewed as the true second parent by Amphibiosan custom.

Much is still unknown about Amphibiosan reproduction; for example, it is known that males can become impregnated, but given that they do not require sexual intercourse (but can make sex) or even genetic compatibility to reproduce, the purpose of the male/female dichotomy is unclear. It is possible they are an evolutionary throwback to an earlier stage of their development, before they evolved their modern system of reproduction; if so, the difference may be superficial. It is even conceivable that they do not have true genders at all, but that each Amphibiosan chooses a gender that suits their personality in order to assimilate with other species like Humans more easily. Uniquely, they are capable of reproducing with members of other species, including humans.

Due to their flexible hydrostatic skeletons, Amphibiosan's bodies can be stretched very far, and they can bloat parts of themselves by pumping air inside them. Similarly to earth cephalopods, they possess a camouflage reflex that may be triggered involuntarily by shock or surprise, blending the Amphibiosan into the background - they become seemingly transparent, except for their eyes. Amphibiosan are also capable of attaching themselves to walls and ceilings with their hands and feet, like a gecko. If necessary, they are able to shed their skins, although for some unknown reason they seem to wear underwear under their skin.