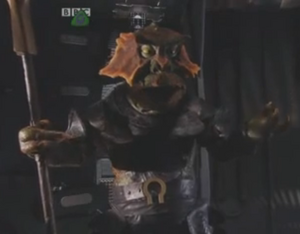 The Amphibibs resemble large anthropomorphic frogs. They possess telekinetic abilities. Like most amphibians they require moisture, however should their be a lack of water they can go into hibernation to conserve their strength and survive.

The Amphibibs were one of Gorm's victims after he conquered Arbo. After Euripides, The Scholar of the Royal Court of Galidor refused to submit under Gorm, his people paid the price after Gorm turned Arbo into a wasteland with only Euripides being the only survivor.

The Amphibibs originally lived in the Low Lands of Arbo.

Retrieved from "https://aliens.fandom.com/wiki/Amphibib?oldid=173751"
Community content is available under CC-BY-SA unless otherwise noted.