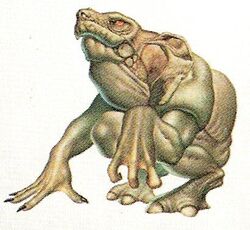 Star Wars
The Amphi-Hydrus are a race of amphibious beings indigenous to the water planet of Dac, more commonly known by its nickname, Mon Calamari. Likely due in whole to their physically frail bodies, they became masters of mind control through use of their sensitivity to the dark side the Force. Just prior to the subjugation of the planet Dac by the Galactic Empire, they had succeeded in gaining a foothold over the entire planet through the use of their telepathic capabilities, which allowed them to take over the minds of a few rancors that had been imported to the world. With these, they wreaked havoc everywhere they moved from the safety of the backs of these monstrous, occasionally semi-sapient beasts. This all came to an end for them however when the Galactic Empire attacked the planet, and they soon reverted to a life of swamp dwellers, where they bitterly awaited the chance to recapture their previously ill-obtained domination.