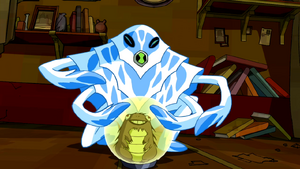 Ben 10
Amperi are a species of jellyfish-like beings from Tesslos, a gaseous planet in the Andromeda Galaxy.[1]

Amperi resemble blue and white jellyfish with six tentacles, four of which are their arms while the other two are their legs. Three hood-like parts make up their head and torso, with the upper most being the head and the lower two being the torso.

Amperi can manipulate and produce lightning and electricity, launching them in electrical blasts powerful enough to harm Vaxasaurians, Revonnahgander, Florauna, and Evolved Methanosians. They can also absorb electrical energy and relaunch it as their own attacks.

Amperi can read the thoughts of other beings such as Humans and Osmosians by sensing the electrical pulses of their minds.[2]

Amperi can fly through the air, and are agile enough to dodge attacks while flying.

Amperi can extend their tentacles multiple times their length.

Similar to Galvanic Mechamorphs and Nosedeenians, Amperi can become pure energy in order to enter electrical cables and generate a large energy blast that surrounds them.

Amperi are highly adaptable, being able to survive on dry land, underwater, and the vacuum of space.

Similar to Ectonurites and Necrofriggians, Amperi can become intangible. They can also combine this with their electrokinesis to electrically shock whatever they phase through.

Due to lacking bones, Amperi can squeeze through extremely tight spaces.

While in space, Amperi can generate a protective energy shield around themselves. While underwater, they can swim at high speeds and safely discharge electricity.

If an Amperi is using electricity while only partly in water, they will shock themselves.

There is a clear limit to an Amperi's durability, as they can still feel pain from an Aerophibian's neuroshock blasts. Similarly, heavy objects falling on them can make them faint.

Amperi can be lifted and swung around by a species with as much strength as Solid Plugg's species.

Opponents such as a hybrid Terroranchula can absorb electricity through Amperi. 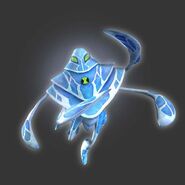 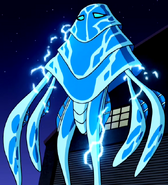 Ra'ad
Add a photo to this gallery

Retrieved from "https://aliens.fandom.com/wiki/Amperi?oldid=194120"
Community content is available under CC-BY-SA unless otherwise noted.