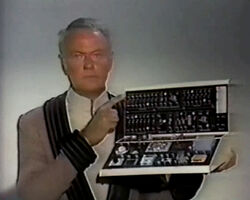 Presumably created by another species

Lucasfilm
Amorphiians are apparent-androids indigenous to the planet Amorphiia presumably built to emulate mankind or a species of near-Human. The motor functions of Amorphiian citizens are frequently impaired by malfunctions, resulting in a temporary loss of power.

Amorphiians are best known for selling a brand of mini-transmitter. In terms of any Amorphiian sellers they also had their speech recorded onto an instructional cassette that would be provided by a manufacturer. This would be used to introduce and give instructions on the creation and use of the products. In addition to being a source of income, the process offered a unique chance for any consumers everywhere to meet an Amorphiian. However, due to the unreliability of Amorphiians, manufacturers that used them had the tendency to state that the tendency of Amorphiians to shut down in no way is meant to reflect the safety of their products, but should rather serve as a guarantee of their high standards of long wear and durability, likely in an attempt to state that the Amorphiians are malfunctioning because they've been doing their job so long that they've run down.