"I know many vegetables that are very clear on that point. Which is why it was eventually decided to cut through the whole tangled problem and breed an animal that actually wanted to be eaten and was capable of saying so clearly and distinctly. And here I am."
―The cow explains why it's more humane to eat it than salad. 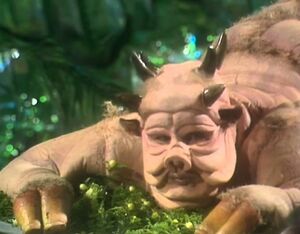 Dish of the Day

Douglas Adams
The Ameglian Major Cow (sometimes casually known as Dish of the Day) is a domesticated species of sapient bovine-like life forms which are bred with a strong desire to be eaten, to the point that their whole mindset revolves around this idea.

They spend their days fattening themselves and will eagerly suggest parts of their bodies that could be consumed. They not only express happiness at this thought, but are actually offended by those who aren't willing to eat them.

Retrieved from "https://aliens.fandom.com/wiki/Ameglian_Major_Cow?oldid=168941"
Community content is available under CC-BY-SA unless otherwise noted.