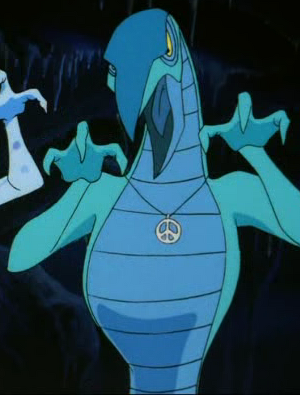 Candi Milo
Amber was one of two alien agents sent to check out Earth. She took the form of the other agent, Crystal's, service dog. During her stay, she fell in love with Scooby-Doo.

In dog form, Amber was a beautiful Golden Retriever and had a black nose and eyes, golden-brown fur, and also wore a red bandana around her neck; the bandana hid her peace sign medallion that, when activated, transformed her from a dog to an alien.

In her actual form, Amber is a semi-quadrupedal reptilian humanoid, with a beaked mouth, digitigrade legs, and a metallic carapace. She is blue-green from her back to her arms and legs and has a sky-blue belly. Her head is vaguely avian in appearance, with hooked beak-like jaws and piercing yellow eyes, much like those belonging to birds of prey. Her feet have two toes with a dewclaw in the back, and her hands had three fingers.

Amber turned out to be a very affectionate character later on in the movie. Seeing Scooby at first glance, she huffed and turned her head unimpressed. She continued playing hard to get up until Scooby-Doo made himself look good and offers her a bunch of flowers where she then licks his cheek in flattery. At this point forward, Amber continues to show affection towards Scooby-Doo.

She had the ability to transform back and forth from an alien to a dog by using her pendant. She was also very strong, and could talk, which she revealed to the gang before leaving.