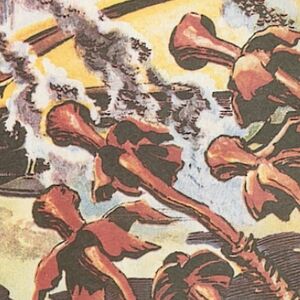 Benevolent if not under attack

The Amarylls were a sapient species of vegetation native to the planet Alvega: the nearest planet to Skaro. As such, they became the first species unfortunate enough to be invaded by the Dalek Empire.

The Amarylls resemble plants with bell-shaped flowers, and are all linked to each other by a complex system of interconnected roots with which they communicate. They are all ruled by a giant subterranean root referred to as "the Controller".

Amarylls can attack opponents by releasing clouds of spores which penetrate their opponents' bodies and germinate quickly, killing them from the inside.

Being the Daleks' closest galactic neighbor, the planet Alvega was chosen as the first target for domination by the first Dalek Emperor. When the local Amarylls resisted the occupation, they proved themselves as formidable adversaries for the Daleks, as they could use their spore-based attacks to destroy the invaders from the inside.

The Daleks, however, learning that the Amarylls were governed by the subterranean Controller; managed to reach the center of Alvega and destroy the root, resulting in the annihilation of the entire planet as well, and the presumed extinction of the Amarylls. This incident laid the foundation for one of the maxims that the Daleks would follow from then on: that which couldn't be conquered would be destroyed.

Retrieved from "https://aliens.fandom.com/wiki/Amaryll?oldid=180147"
Community content is available under CC-BY-SA unless otherwise noted.