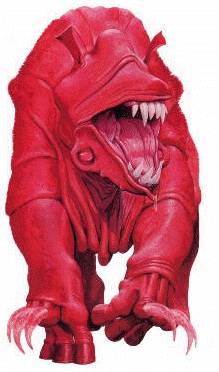 Urth of the New Sun

Alzabo are large, bear-like predators from an unknown star system. They are covered in thick, reddish fur, and prefer to live in mountainous areas. These beings are particularly terrifying not only because of their enormous talons and large, powerful jaws, but for their disturbing ability to absorb the memories of their prey. This means that if they were able to eat a Human, they would gain the ability to mimic human speech and thought process, potentially making them sapient.

It can be theorized that the Alzabo's homeworld must be quite cold, due to the creatures thick red fur and preference for mountainous regions.

Retrieved from "https://aliens.fandom.com/wiki/Alzabo?oldid=181268"
Community content is available under CC-BY-SA unless otherwise noted.