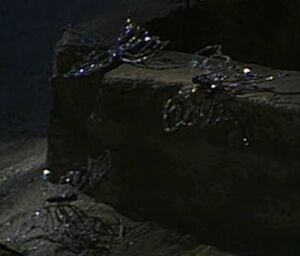 Land of the Lost

Land of the Lost

The Sleestak, and perhaps the Altrusian, are forced to hunt them during the night, which is the time they naturally emerge due to a noctural lifestyle. They are cold-blooded, and cannot survive an extended night, yet apparently cannot survive during diurnal hours either, else they would presumably go outside during these times instead.

It is unknown why, but to cause egg fertilization, the moth-like organisms must be consumed to be useful. The Sleestak have specified that a thousand of their kind can be created in a thousand hours through the use of these moths. The Sleestaks attempted to do this by disabling a second clock pylon to create perpetual nightfall in order to give them the numbers they feel they would need in order to resume control of the Land of the Lost, although since they cannot survive long periods of cold this strategy turned out to be unfeasible.

Retrieved from "https://aliens.fandom.com/wiki/Altrusian_Moth?oldid=181698"
Community content is available under CC-BY-SA unless otherwise noted.