Alien Species
Register
Don't have an account?
Sign In
Advertisement
in: Land of the Lost Universe, Sapient Species, Endangered Species,
and 12 more 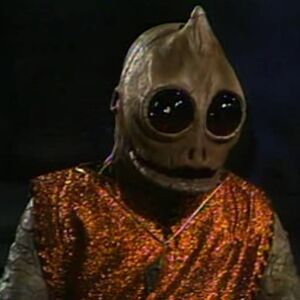 The Altrusians have three digits on each hand, unlike their barbaric descendants, which have only two. They are also shorter than the Sleestak and have yellow, rather than green skin color. Altrusians are a naturally proud people; so much in fact that if they witness another being's display of sacrifice or self-control they will feel absolutely obliged to display at least the same level of such qualities. This species is all but extinct now, the only known individuals being time travelers.

The origins of the Altrusians are unknown. Unlike the other inhabitants of the Land of the Lost, they along with their descendants don't appear to be related to any specific life forms known in Earth's history. It is possible that they are intended to be viewed as extraterrestrial and/or extradimensional in origin, but this is not confirmed.

Most of their technology was based on enigmatic crystals, powerful enough to create energy discharges, open spacetime doorways and even control the weather. They are generally acknowledged as the creators of the Land of the Lost, although to what extent is not clear – whether they created the closed universe/dimension from scratch or simply populated it and created the machines to control it. The former appears likely, given that the Pylons and crystals have been shown to be not simply portals and weather controllers but also capable of influencing even the orbital movement of the sun and be influenced (reciprocally?) by those of the three moons.

Another clue that the entire realm was created artificially can be found in the existence of the mysterious energy generator for the entire Land of the Lost, which exists underground in a space seemingly devoid of gravitational attraction. However, the existence of the mysterious and powerful (although benevolent) entity known as Blandings the Repairman and hints of a larger power which he responds to; leaves clues that perhaps the mythology behind the Land is far more complex than what has been revealed thus far.