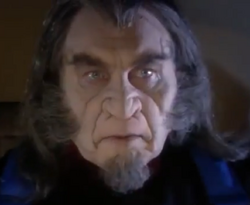 Space Precinct
The Alred are an alien species from Niven III, a rim world.

A humanoid race with a mane and lion-like nose.

The Alred hailed from a world that was not known to most of the galaxy. According to the military data from the League of Planets, the Alred were engaged in a civil war. Their conflict made them easy targets to the Omara who sacked the weakened planet. A lone Alred named Vachel who survived the invasion intercepted a secret communique leading him to the planet Altor the Omara's next target. Not sure who to trust he trailed the names in the communique who were murdered by some unknown means. The Demeter City Police suspected him to be the killer, causing Vachel to evade the authorities. He managed to convince Lt. Brogan on the conspiracy which led them to Demeter Dogs where the Omara and their spies set up an operation to deliver dogs implanted with device to attack the populace. The Omara were stopped and routed by the League allowing Vachel to find his peace and return to his homeworld and rebuild.