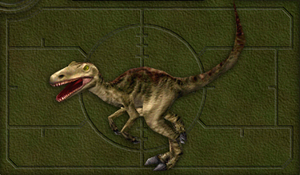 Allosaurus feeds on smaller prey like Gallimimus or Moschops, they have the capabilities to hunt larger prey like Amargasaurus or Parasaurolophus as they have little defenses. Allosaurus hunts in a "wavy" pattern, and jumps at its prey.

Allosaurus has a reddish back and a very natural look, which makes it blend in very well in most Central Sector islands.

Allosaurus barely looks like it's Earth counterpart, but the part above the eyes is slightly like it's counterpart.

Retrieved from "https://aliens.fandom.com/wiki/Allosaurus_(FMM-UV_32)?oldid=135382"
Community content is available under CC-BY-SA unless otherwise noted.