Alliance to Restore the Republic 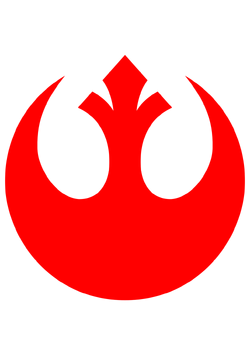 Reorganized into the New Republic

Star Wars
The Alliance to Restore the Republic, also known as the Rebel Alliance and The Rebellion, was an rebel government formed out of various rebel cells that opposed the Galactic Empire. It was made up of various species from the galaxy, such as the Mon Calamari, Humans, Twi'leks, Ewoks, Talz, Rodians, Wookiees, Selonians, Lepis, and others.

The early Alliance to Restore the Republic was formed when Imperial Senator, Mon Mothma of Chandrila defected from the Empire and united various rebel cells together with the aid of Phoenix Squadron and Gold Squadron on the planet Dantooine in 2 BBY.

Building up a Rebellion[edit | edit source]

After building up their rebellion, the Alliance to Restore the Republic began openly attacking the Galactic Empire, sparking the Galactic Civil War. The rebels would continue to launch various hit-and-run tactics against the Empire, attacking key Imperial locations such as factories or storage facilities, and slowly continuing to build up their military and navy, even gaining support from various Senators from the Imperial Senate.

During the early years of the Galactic Civil War, a rebel strike team, Rogue One, discovered the terrible existance of a massive Imperial superweapon with the capability to destroy entire planets called the Death Star. Rogue One would, after discovering this superweapon, travel to the Imperial controlled planet, Scarif, and steal the plans to the superweapon, with the aid of the Rebel Fleet. During this battle, the Imperial General and Sith Lord, Darth Vader, arrived and led the Imperial Fleet into battle against the rebels, even managing to board the rebel command ship and kill a few rebel soldiers, but failed to retrive the Death Star plans. The plans were then given to Alderaanian princess, Leia Organa, who kept the plans aboard her ship, the Tantive IV, and traveled to the desert planet of Tatooine.

Retrieved from "https://aliens.fandom.com/wiki/Alliance_to_Restore_the_Republic?oldid=180799"
Community content is available under CC-BY-SA unless otherwise noted.