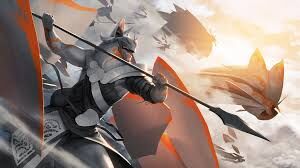 Endless Universe
The Allayi are a bat-like race in Endless Legends.

The oldest sentient species on Auriga, the Allayi offer a stark contrast to some of its later humanoid factions. Displaying great manes of long hair topped by big ears and wide muzzles, they have long limbs and fragmented wings, akin to that of the Scythers, whose design was based on Allayi Monks.

Deeply connected to the moods of Auriga, the faction undergoes changes to its abilities as the seasons change.

Before the Endless came to Auriga there were other peoples and other forces on Auriga. These were destroyed or scattered and only now, centuries after the horrors perpetrated by the Endless have faded, are they coming out into the light. Foremost among them are the Allayi, an adaptable race who change their way of life and even their form with the seasons. Remember that they view Auriga as their goddess and mother, and they are willing to do whatever is necessary to protect her.

To survive the horrors of the Dust Wars, the Allayi scattered themselves to the cold places of Auriga. now that the Guardians have awakened they are coming together, hoping to save Auriga and rebuild the life they once had.

Masters of flight and battle who change their society and even their forms with the seasons, they are returning to re-establish their nation now that the horrors perpetrated by the Endless are long gone. They view the planet as their home and goddess, and will go to any lengths to protect her.