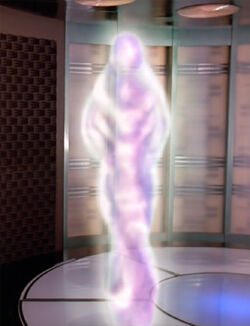 Star Trek
Allasomorphs are a sapient, spacefaring species of shapeshifters from the planet Daled IV.

Their natural form is luminescent and translucent, but they can alter their molecular structure to assume the appearance of a Human being as well as many other humanoid species - some considerably smaller or larger.

Their homeworld of Daled IV is a tidally-locked planet, one side cast in perpetual daylight and the other in perpetual night. The atmospheric conditions have also been described as hostile to Human life, but the Allasomorphs' shapeshifting abilities allow them to live there. However, the existence of two vastly different cultures that evolved in the light hemisphere and in the dark hemisphere have resulted in a nearly constant state of civil war between the two sides of the planet. 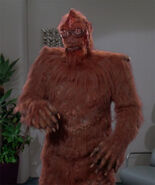