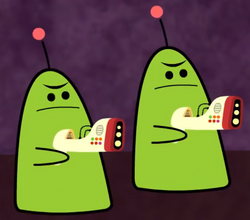 These Aliens are a species of space-faring beings from "The Mr. Men Show".

The Aliens are human-sized creatures. They hardly have any limbs to speak of, outside of a pair of simplified arms. Each individual has a prominent unibrow, and a robotic-like antenna on their heads.

The species speak to eachother in their own form of language, though to Human ears it sounds much like gibberish.

The aliens possess a number of highly-advanced weaponry and vehicles: pistols that trap their targets in a goo-like substance for easier transport.