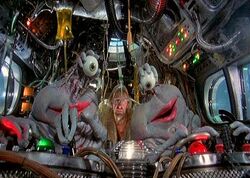 Monty Python's Life of Brian
This is an unnamed alien species which briefly visited Earth in the year 33 AD. These aliens have the appearance of grey blobs, about man-sized, with loads of tentacles and one hand holding their one eye. They fly around in a strange-looking yellow spaceship.