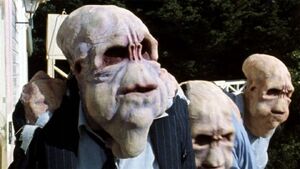 Bad Taste
These Aliens are a sapient humanoid species.

The Aliens are very humanoid in appearance, closely akin to an elder, pot-bellied Humans. They are capable of changing their true forms into a more human-like, and more "approachable" form, though they're unable to change the clothes they wear.

Interestingly, the aliens develop an almost zombified state of mind when disguised as a Human, suggesting the process of transforming from their true forms alter the aliens' minds in some form. They regain their sapience once returning to their true forms.

The aliens seem to live in a strict hierarchy. The worker-class of this race are highly devoted to their leaders and superiors, willing to die for a task given to them or to protect a designated target.

Their society also seems to be highly advanced, or at the least more akin to Humanity, as a group of these aliens had invaded Earth with means of turning the population of Humans into a new food supply for their "fast-food industry", with extra benefits that if it would please the superiors then it would prompt a full-extent invasion.

Retrieved from "https://aliens.fandom.com/wiki/Aliens_(Bad_Taste)?oldid=198839"
Community content is available under CC-BY-SA unless otherwise noted.