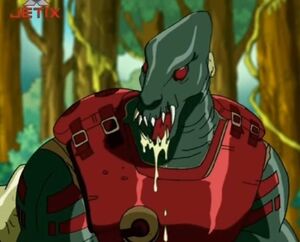 Alienator is an extraterrestrial creature from outer space who came to Earth to hunt and devour humans.

This alien is blind, but capable of detecting movement. It moves around with extreme agility and speed. It can be driven away by a WOOHP-developed dog whistle which works on aliens as well as dogs.

Little is known about Alienator, such as where it came from in space and how it ended up on Earth. All that's known is that its purpose was to devour humanity, but it got captured by W.O.O.H.P. and left on a secret prison island. It is also known that it's blind, which is compensated by its other senses being acutely well-developed.

This alien was encountered by Sam, Clover and Alex when they went to the island to rescue Britney, whose airplane had seemingly crash-landed on it. The four spies ended up being captured by the criminal Willard, who left them in a cage to be devoured by the Alienator. Fortunately, they were able to frighten it away with a dog whistle.

It is unknown what happened to Alienator afterwards. Though, it's quite possible that the creature still remained on WOOHP Island and was then killed in the explosion.

Retrieved from "https://aliens.fandom.com/wiki/Alienator_(Totally_Spies)?oldid=151102"
Community content is available under CC-BY-SA unless otherwise noted.