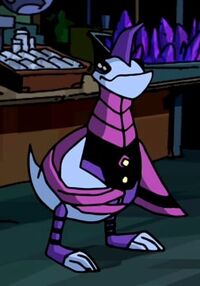 Ben 10
Alien Z's Species is an unnamed race of penguin-like aliens from an unknown planet.

Although they traditionally have light blue skin, this species can come in other colors. For example, Negative Alien Z has pale tan skin.

Similar to Earth penguins, members of this species are excellent swimmers and can reach fast swimming speeds.[1]

This species can launch themselves onto land like a torpedo and slide on their bellies.[1]

This species has laser knifes on the edges of their fins.[1]

Albedo as Alien Z
Add a photo to this gallery

Retrieved from "https://aliens.fandom.com/wiki/Alien_Z%27s_Species?oldid=193286"
Community content is available under CC-BY-SA unless otherwise noted.