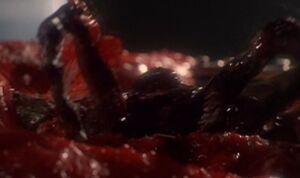 This is an unidentified species of parasitic spider-like creatures which can live inside the esophagus of a Human host.

While they don't seem to feed upon the host directly, they turn the host into a killer by stimulating violent behaviour. When the host attacks a victim, the spider forces its way out of the host's mouth and into the mouth of the victim. It kills the victim from the inside by liquefying all of their organs and soft tissues - leaving behind disfigured, desiccated, almost mummified bodies. After feeding, the spider will crawl back into the mouth of its host. It can live for decades and remain alive inside the esophagus even long after the host's death.

In the late 1940s, the United States government somehow took hold of at least three specimens of these spiders and performed secret experiments by implanting them into three test subjects: George Gissing, Terrill Oberman and Edward Skur. The three were war veterans who were unwillingly made hosts to the spiders while supposedly being operated for war-sustained injuries. The government apparently hoped that the men infected with the spider would become effective assassins, but none of them were able to cope with living with such creatures inside of them. Gissing and Oberman committed suicide while Skur turned against the doctors and government agents he blamed for turning him into a monster, and started targeting them for murder.

Retrieved from "https://aliens.fandom.com/wiki/Alien_Spider?oldid=161061"
Community content is available under CC-BY-SA unless otherwise noted.