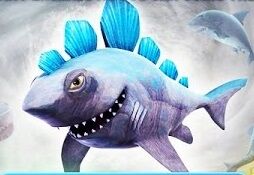 Hungry Shark Universe
The Alien Reef is the name given to an alien shark that is found within the android app game Hungry Shark: Evolution.

Alien Reefs are shark-like creatures, most of their anatomy mirroring that of a standard requiem shark species. It has grey skin, two sets of fins and a shark like tail. A key feature the Alien Reef had is the sails along its back. These sails mirror those of a prehistoric Stegosaur, and almost seem to glow a blue hue. They're the smaller species of sharks present in Hungry Shark: Evolution, but considering only the juveniles (Alien Baby Reef) is ever shown, it's not possible to determine the full size. The individuals shown are dwarfed by most other playable sharks.

If one were to equip the Alien Baby Reef to their shark before playing, they become protected by projectiles.

Retrieved from "https://aliens.fandom.com/wiki/Alien_Reef_(Hungry_Shark)?oldid=147960"
Community content is available under CC-BY-SA unless otherwise noted.