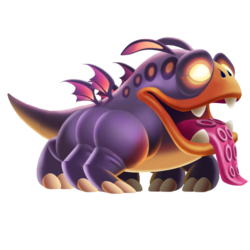 Dragon City
The Alien Pet Dragon is a very rare Dark/Terra/War Dragon species. While many dragons can be domesticated by humans, these can also be kept as pets by Martian Dragons, hence their name.

This species is vaguely mammalian in appearance, but are most likely reptilian, because, it's a dragon. They have purple skin, six legs, four wings, and an oddly tentacle-like tongue. They seem capable of thriving on both Mars and Earth, as well as in the strange dimension with floating islands known as "Dragon City", ruled by the god Deus.