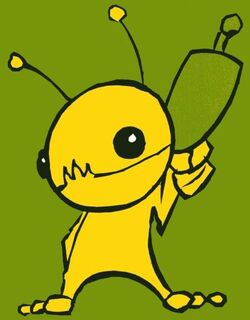 The Behemoth
Alien Hominids are an extremely mysterious species of yellow-skinned bipeds from an unknown planet. Not even their true names are known, and thus they are referred to simply by the most simple description possible.

The hominids are small creatures, about 2 to 3 feet tall (~ 61 - 91 cm). They have large heads and antennae, which are topped with small balls. Their bodies are wide, and their arms are thin, and they have four fingers on each hand. They also only have three toes on each foot. They have large mouths with three bottom teeth. They seem to have varied body colours. They also seem to have a strong jaw, biting through Human flesh and bone in one bite.

The hominids have green laser pistols that shoot small yellow bullets. They also use grenades and blades as secondary weapons. The pistols can get different ammo, such as big bullets, acid or flame bullets. This also affects grenades. Their UFOs have rounded cockpits on a circular base with the main engine rockets on the bottom. On the sides, they have two pods on the sides that may be secondary engines.