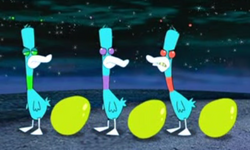 Courage the Cowardly Dog
Alien ducks are, as the name implies, a species of duck-like creatures from an unknown planet. The real name of this species is unknown.

They have blue feathers, white beaks and legs, antennas, and pupilless eyes of various colors. It would appear that egg laying is not gender specific in this species, as they can lay green eggs when they get emotional (even though one of them protests this).

First contact with this species was made in Nowhere, Kansas, when two of them visited to rescue their brother, who had been kidnapped by a chef working for Area 51, planning to cook him for dinner (kind of a waste of an alien life form in my opinion).