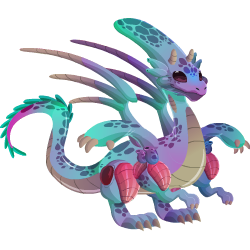 "It's a dragon from another universe, a completely unidentified alien entity! Don't even try to fool this creature, it can read your mind before you even think your thoughts!"
―In-game description

The Alien Dragon is a common Sea/Metal Dragon species originating from an unnamed alternate universe adjacent to Dragon City.

The Alien Dragon has both the Sea and Metal elements in its makeup, and it stated to have psychic powers.

Physically, this creature appears to be a cross between the stereotypical Grey and the Xenomorph. In its baby and young forms, it has four legs, but six when reaching adulthood.

As to be expected from dragons, the Alien Dragon is an oviparous species. Like many dragons from the Dragon City realm, its egg matches the color of its skin, despite not being native to this world.