"Scully, if an alien civilization were technologically advanced enough to build and send artificially intelligent robotic probes to the farthest reaches of space, might they not have also been able to perfect the extraction of methane fuel from manure, an abundant and replenishing energy source on a planet filled with dung-producing creatures?"
―Fox Mulder, explaining his idea about the origins and purpose of the robotic roaches. 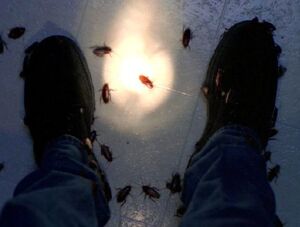 A mysterious species of cybernetic cockroaches, believed to be of extraterrestrial origin, was discovered in the town of Miller's Grove, Massachusetts in 1996. Their origins and purpose aren't known for certain, and almost everything about them remains speculative, given as the robotic insects vanished as mysteriously as they first appeared.

At first glance, the alien cockroaches appear indistinguishable from their earthly counterparts, although differences can be immediately noticed by an expert upon close inspection; and examination on a microscope reveals that they're actually mechanical creatures, made with technology that is beyond the reach of 20th century robotics.

Despite being enclosed in metallic exoskeletons, they are in fact fragile, and can be easily crushed by hand, even accidentally, as demonstrated when Agent Fox Mulder first tried to capture one.

The hypothesis postulated by Mulder is that these cockroaches are mechanical scouts created by an advanced alien civilization, akin to the Earth probes sent to Mars and other planets for the purpose of space exploration. The reason for being disguised as dung-eating insects could be that one of their main purposes is to extract and possibly process methane from animal feces, which can be converted into an effective fuel source.

Despite not showing any fear of Humans and often swarming in their presence; the alien cockroaches appear to be nevertheless indifferent, and not hostile towards people; and the investigations suggest that the deaths that occurred in their presence (and caused a brief wave of panic in the town) were actually coincidental. With their mission seemingly completed in the area, the cockroaches disappeared; speculated by Dr. Berenbaum to have moulted into a flying form and returned to "wherever they originated".

Retrieved from "https://aliens.fandom.com/wiki/Alien_Cockroach?oldid=181501"
Community content is available under CC-BY-SA unless otherwise noted.