Alien Species
Register
Don't have an account?
Sign In
Advertisement
in: Creatures with Unknown Diets, Creatures of Unknown Origin, Aliens on Earth,
and 3 more 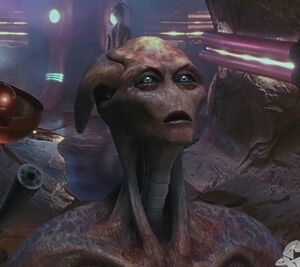 The Arrival
The "alien agents" are a race of sapient humanoid beings.

Members of this species are humanoids and require high temperatures to live.

Things that are cold like liquid nitrogen and freezing places, like the arctic and meat lockers weakens them and knock the aliens into a coma. Some theories suggest their skin is only as thick as three sheets of paper stacked on top of one another.

The alien agents are a race of conquerors bent on terraforming Earth by disguising themselves as Human beings and building powerplants that emit green house gases in order to raise the world's temperatures to make it more like the aliens' own homeworld.