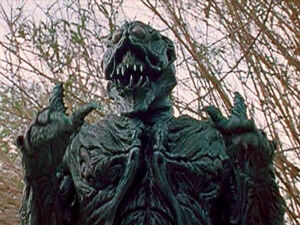 Unseen Evil 2
Alien 3000 is the name given to a race of hostile aliens. One specimen has lived on Earth for over 300 years after it and another individual crash-landed there, able to survive by eating and digesting gold, and numerous others arrived to Earth shortly after its death for invading the planet.

Alien 3000 is a large, humanoid creature standing at around the same height as a standard Human being. Their skin is dark gray in color, but they seem to have specialized chromatophores that enable them to turn themselves almost invisible at will, allowing them to become almost non-existent to other beings. Their heads possess insect-like eyes along the top of the cranium, with exposed gums and teeth lining its jaws.

Previous studies however suggested they were more arachnid-like in nature, with multiple sets of legs, but these specimens seemed to have gone extinct as of current time.

Alien 3000 is extremely hostile, and will quickly attack and kill any intruders within its territory. While at first believed to be for protection over its food supply, later studies revealed it to be more malicious.

The most prominent ability of this race is their ability to turn themselves almost invisible, making them incapable of being sensed by other beings in this state. Whether or not this is a natural ability or through highly-advanced technology remains unclear.

Retrieved from "https://aliens.fandom.com/wiki/Alien_3000?oldid=198830"
Community content is available under CC-BY-SA unless otherwise noted.