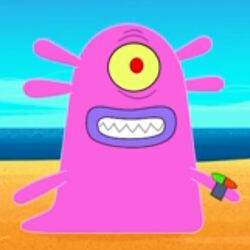 This unnamed alien arrived on Earth traveling in an island-sized flying saucer, with the intention of capturing a mermaid for unknown purposes.

This alien is a gel-like amorphous creature with six pseudopods that can be used as arms to grasp objects. It can also create smaller pseudopods to act as fingers when needed. It is mostly pink in coloration, and has a mouth with purple lips and white teeth, as well as a single round yellow eye with a red pupil.

The alien's spaceship is a huge saucer-shaped vessel which can be made invisible for camouflage. Its equipment notably includes a wristwatch-like device that enables the wearer to assume the appearance of other life forms, create portals to teleport over short distances, and emit energy blasts.

Retrieved from "https://aliens.fandom.com/wiki/Alien_(Zig_%26_Sharko)?oldid=181153"
Community content is available under CC-BY-SA unless otherwise noted.