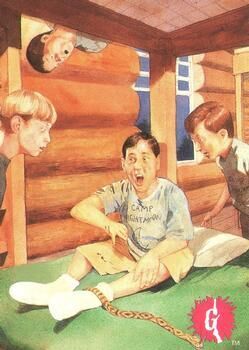 This unnamed humanoid species reside on a distant planet, and launched an expedition to Earth.

The aliens are Human-like humanoids, with any differences in physiology unknown.

Most of the aliens' society is unknown, but it appears to be at very similar to Western Earth societies, although they are known to have a unique sport known as scratchball. The alien government is known to launch expeditions to other planets with civilian astronauts, even allowing the children of said civilians to accompany them, but require the children to pass a series of tests involving bravery and logic. To accomplish this, the alien government is known to set up children's summer camps to be a front for the tests, where a child slated for off-world travel is assigned to, although it is unknown if this is a common practice.

Alien technology, at least that used in their summer camps, are identical to late 20th century Human technologies. However, they have far more advanced spacefaring technologies, capable of traveling to distant planets.

At some point in time, the aliens developed an Earth-like society and interplanetary travel. Two alien scientists, a couple, were assigned by the alien government to go on an expedition to survey Earth's native life. They wanted to bring their son, Billy, with them, but his age required him to pass a series of tests. The government set up a summer camp, known as Camp Nightmoon, to test Billy. Billy, sent to the camp alongside other children, was quickly ushered off the bus halfway to the camp without even knowing where he was. Wolf-like animals attempt to attack the children, but are stopped by Uncle Al, a government agent and the camp leader. Uncle Al got them onto another bus to the actual camp, where the male and female campers are separated into separate areas. Billy was assigned to Bunk 4, alongside three other children and a camp consular named Larry, and instructed to write letters to his parents every day. One of the children, Mike, was soon bitten by a snake in the bunks. However, the camp appeared to lack a nurse, the first of many suspicious occurrences. At a campfire, Uncle Al warned the children not to go out after dark, and to stay away from the "forbidden bunk." Despite that warning, and a later warning of a dangerous creature known as Sabre that roamed the area, two campers named Jay and Roger tried to investigate the forbidden bunk. The next day, Larry suddenly injures a camper named Colin in a game of scratchball, claiming it was an accident, sending Colin and Mike away to get help. Larry later returned with Colin, and Billy found that all of Mike's belongings had vanished. Jay and Roger were later supposedly attacked by Sabre, with Roger vanishing. Billy met with Jay, managing to calm him and go to sleep. The next morning, Uncle Al told the campers that there was never a camper named Roger. Later, the male campers went swimming, and Billy gets pulled away by two female campers named Dawn and Dori, who tell him of other girls vanishing from their side of the camp, with no consular recognizing the disappearances. Billy attempted to call his parents, only to find that the phones in the camp were fake. Sometime afterwards, Billy tried to drop off a letter to his parents while Jay and Colin were out hiking, finding that there were no staff members present in the office, and that no letter had actually been mailed. Returning to the bunk, Billy found that Jay and Colin are missing, and have been replaced, with Larry denying their existence, solidifying Billy's suspicions that something was very, very wrong. Later, at night, Larry woke Billy up and took him out to the woods for a test, where Billy was confronted with Uncle Al and other boys. Uncle Al distributed rifles to the boys, saying that Dawn and Dori had escaped and must be hunted down. Billy refused, turning the rifle on Uncle Al when Al attacks him for his refusal, but when he fired, it was revealed to be a fake rifle. Uncle Al reveals that the entire camp and all the strange occurrences were one giant test to see if Billy's skills, especially in logic and bravery, could qualify him to accompany his parents to Earth. As Billy had passed the test, his parents meet him and take him with them on their expedition.