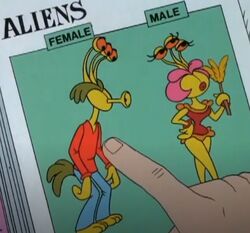 This species is notable in that, from a Human perspective, the males appear to be female and vice-versa.

Members of this species are Human-sized bipeds with yellow skin, tubular mouths and three flexible eyestalks protruding from the top of their heads. Each of the three red eyes can move and form images independently of the other two. They have three-toed feet, and their hands are mitten-like, with no separate digits other than an opposable thumb. Feather-like hair adorns their heads at the base of the eyestalks.

This species is perhaps most notable for their curious sexual dimorphism. The females are taller and lankier, while the males have hourglass physiques that make them look feminine, making it easy for a Human observer to mistake the male for female and vice-versa. Males also have pink hair, red lips and long eyelashes that distinguish them from the females.

Females of this species are also very strong physically, capable of lifting and throwing adult Humans with ease. It's not known whether this also applies to males.

These aliens speak their own language, although it can be translated by special translator devices. Just as their physical appearance is the reverse of what would be expected by Humans, so is their gender roles in society: the females are the ones doing exploratory and menial work while the males tend to stay in their spaceships and be more concerned with domestic duties, such as cleaning and dusting.