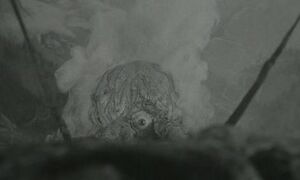 The Trollenberg Terror
These are massive, cephalopod-like extraterrestrial creatures whose bodies consist of a large mass with a single eye and a number of very long tentacles. The creatures have invaded Earth and dwell on mountaintops, having been spotted in the Andes and later in the vicinity of Trollenberg, Switzerland.

Their presence is signaled by a foggy, radioactive mist cloud and an intense cold. Though nothing is known about the creatures' origin and motives, Professor Crevett theorizes that they might have come from a dying planet, seeking to colonize other worlds; he also acknowledges their preference for mountains as indicative of different atmospheric requirements, and believes the cold foggy cloud represents the aliens' attempt to reproduce their own environment; possibly even the beginning of an attempt to "xenoform" Earth.

The aliens from Trollenberg also show the ability to control people, putting them in a "living dead"-like state. Apparently, the aliens feel threatened by Humans who possess telepathic abilities, and will hypnotize others to kill them. Fortunately, the Trollenberg invaders are also vulnerable to fire. With the villagers safe inside the heavily fortified observatory; military planes are ordered to bomb the area, successfully eradicating the alien menace.

Retrieved from "https://aliens.fandom.com/wiki/Alien_(The_Trollenberg_Terror)?oldid=185301"
Community content is available under CC-BY-SA unless otherwise noted.