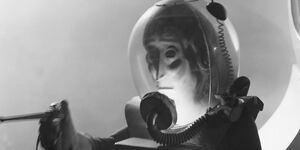 Unknown, but atmosphere differs from Earth's

The Man from Planet X
This unnamed species of sapient humanoids need a life support system to operate in Earth's atmosphere. They are native to a rogue planet discovered entering the Sol System in 1951 and designated as "Planet X" by astronomers.

As it turns out, the aliens' homeworld was slowly dying out, leading them to develop an anti-gravitational system to move the entire planet out of its native star system and into the Sol System. This same technology is what allowed the planet to safely approach Earth without disturbing its orbit, moving it to a distance suitable for the teletransportation of an invasion army. A single alien agent was sent first, piloting a conventional spacecraft that landed in a small village in Scotland.

The alien was armed with the ability (either natural or technological) to hypnotize humans in order to use them as laborers to construct a teletransport device, which would beam the remaining invaders to Earth as soon as Planet X makes its closest approach. The alien first made contact with scientists Professor Elliot and Dr. Mears, the reporter Lawrence and the professor's daughter Enid. At first, they acted peacefully towards the alien, protecting it from the suspicious villagers and even saving its life when it needed help regulating its spacesuit. However, all attempts at communication failed.

Later, using mathematical equations and music as a common ground, Dr. Mears secretly managed to communicate with the creature, but then violently attacked it and attempted to steal its formula for the material of which the spaceship's hull was made (which had been demonstrated to be tougher than diamond). After escaping from the Professor's house, the alien seemingly became convinced that an aggressive colonization was needed and proceeded to kidnap and hypnotize locals (including Enid, Mears and the Professor) to work on the transport. Lawrence and the townspeople called for military help and managed to evacuate most of the hypnotized workers and kill the alien before the military destroyed its ship and transportation device. When the time came, Planet X passed right through Earth's orbit and back to interstellar space to its next unfortunate destination.

Although the alien's actions are hard to interpret due to its inhuman nature, Enid later speculated that, hadn't Dr. Mears attacked the creature, things could have played out differently.

Retrieved from "https://aliens.fandom.com/wiki/Alien_(The_Man_from_Planet_X)?oldid=193887"
Community content is available under CC-BY-SA unless otherwise noted.