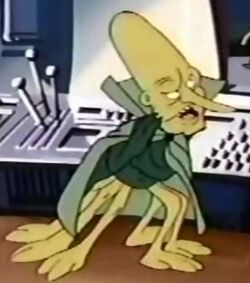 This is an unnamed alien species; a member of which attempted to invade Earth by creating clones of the natives.

This green-skinned alien is a grotesque creature, with an elongated cranium, a long pointed nose, sharp teeth, tridactyl hands, and six legs. They're sturdy enough to survive a grand piano falling on top of them.

Members of this species travel in flying saucers, and have access to superior technology, which allows them to instantly create clones of other creatures inside pod-shaped structures. Apparently, they don't even need to collect genetic material: a recorded image of the subjects is sufficient for the alien to create clones of them. They can also teleport directly from their ships to the ground.

Retrieved from "https://aliens.fandom.com/wiki/Alien_(The_Invasion_of_the_Scooby_Snatchers)?oldid=155513"
Community content is available under CC-BY-SA unless otherwise noted.