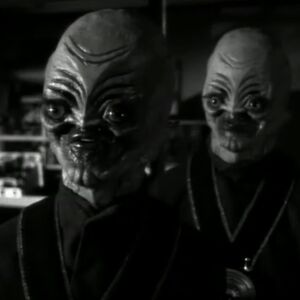 The Outer Limits
These aliens are an unnamed species of peaceful humanoids native to a warm yellow planet.

They resemble Human-sized Greys with hairless skin, pointed ears, round eyes, dark fleshy lips, and gill-like slits on their heads.

Their hands are five-fingered and resemble Human hands covered in reptilian scales.

These aliens are a peaceful species, although they still have access to deadly weapons for defense. They claim that their world is different from Earth in that they don't distrust each other and don't live in fear of war. Their technology includes force fields and flying saucers.