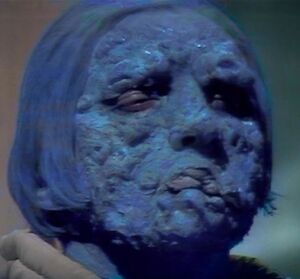 These aliens are an unnamed species of sapient, spacefaring humanoids which can only survive in environments with enormous doses of radiation: specifically requiring over two million rads, which is more than enough to kill a Human.

Although naturally peaceful, they have access to highly destructive technology and have threatened to blow up planets which have committed perceived acts of war against them.

The aliens have blue skin and appear like grotesque humanoids. They require high levels of radiation to live and are capable of generating potent energy blasts from their hands, which can easily kill a Human and blast open door locks. Their bodies also emanate a force field which can stop bullets.

They communicate by radio emissions and cannot speak to other species without the use of translation devices. They're also not susceptible to the effects of G-force.

The aliens' technology includes mental conditioning devices and some of their discoid ships are over half a mile in diameter. They claim to have enough power that they could potentially obliterate planets, although they seem to prefer not to do so.

Retrieved from "https://aliens.fandom.com/wiki/Alien_(The_Ambassadors_of_Death)?oldid=143546"
Community content is available under CC-BY-SA unless otherwise noted.