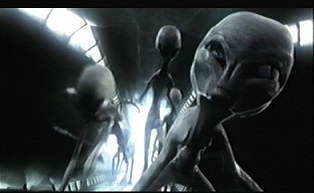 A species which visit Earth in Steven Spielberg's miniseries Taken.

The form encountered most frequently by humans is reminiscent of the Roswell Greys in shape. A member of the race explained that despite physically different they are genetically similar to humans.

They possess no emotions or any sense of right and wrong, which led to some of the problems in the series. Without these traits they were unaware that their experiments on the taken humans were both invasive and terrifying.

On Earth the aliens are vulnerable to the same physical limitations as human beings though they are a lot more durable than humans; an alien thought dead in the crash was merely stunned. Also, the aliens discovered their psychic powers are dangerous to humans, forcing them to tone their powers down to a fraction of their strength.

The aliens first visited Earth in the closing days of World War II. Their mission was one of scientific exploration and they intended to study the Earth, its people and their history. During the mission one of the alien ships crash landed on Earth. Since their ship's were essentially living energy they had not anticipated what effect contact with Earth matter would do. The crash eventually became the Roswell New Mexico Crash in 1947. While the military recovered the bodies and ship, a still living alien managed to escape to a nearby town.

Disguising itself as a human it was taken in by a local woman and her children and befriended them. The alien, who went by the name John, was eventually forced to leave when the military came after him but not before he fathered a son with the woman.

Retrieved from "https://aliens.fandom.com/wiki/Alien_(Taken)?oldid=185028"
Community content is available under CC-BY-SA unless otherwise noted.