Alien Species
Register
Don't have an account?
Sign In
Advertisement
in: Sapient Species, Unnamed Species, Invaders to Earth,
and 17 more

Alien (Spielberg's War of the Worlds)

Alien (Spielberg's War of the Worlds) 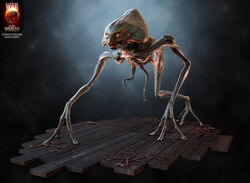 3 Legged, Amphibian like has 2 smaller arms and a head resembling their tripods.

Variations between pale, grey to green

Unknown, albeit their movement is somewhat agile

Suction-like grip on any surface

Driven off Earth, though quite likely endangered as a species because of the bacteria and virus from Earth could've been carried with any survivor

Steven Spielberg
This is a highly advanced unnamed, exterrestrial species which arrived on earth and beamed their pilots down the previously buried tripods, the tripods soon emerged from the ground minutes after the crew arrived. The unearthing of the tripods caused severe localized seismic activity that could crack asphalt, and sink buildings into the sinkhole where the tripod emerged. Upon emerging from the ground the tripods quickly survey their environment and proceed to exterminate or harvest local humans. As the aliens proceeded to invade the earth their focus seemed to shift from the extermination of humans, to the harvesting of humans to grow the red weed. The Tripods are equipped with two heat rays, several tentacle like mechanical appendages, and some variants have two capture baskets, the Tripod also has a nearly if not completely impenetrable energy shield that prevents all projectiles from breaching it. The Tripods may be vulnerable to energy weapons due to the fact that their own heat-ray passes through unhindered. Upon abducting humans into capture baskets one of two things happen. The Humans are Either A. Pulled up into the seemingly organic interior of the tripod via a mechanical tentacle or B. They are restrained, lowered down onto the ground an a mechanical appendage resembling the other tentacles drains the blood of the captured victim. The aliens met their downfall when consuming (presumably) eating tainted red weeds or drinking human blood, they apparently had no natural defense against micro-organisms like the ones on earth and died within a matter of days.

The aliens harvest blood to use as a food source, and as a way to construct the red weed they use as flora to cover Earth.

The aliens were defeated by bacteria, due to a difference in worlds, the aliens were not immune to Earthly microorganisms. What is ironic is that the humans could not defeat the Tripods and aliens, almost going extinct trying, but the smallest bit of life had enough power to do so.