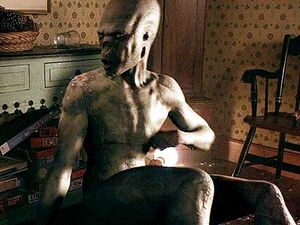 Signs
This is an unnamed spacefaring alien species which briefly invaded Earth.

They are very athletic, being able to jump up to the roof of a farmhouse that is about ten feet off the ground. Their skin changes colors, giving them a camouflage ability- which is how they remain unseen throughout most of the invasion. They also have a spike that protrudes from their wrists that expels poisonous gas. Water is their weakness, as contact with it seems to "burn" the alien and cause it great amounts of pain.

This species has clearly established their ability to master space travel in order to get to Earth. Their ships can primarily be seen at night via the yellow-orange lights that show that they are in fact saucer shaped craft. Graham Hess asked his brother Merrill if there had been any new development, and Merrill explained that a bird hit something in the sky and fell straight down; explaining that they did in fact master cloaking technology. It is also unknown what kind of weapons these creatures possess due to the fact that they did not use them.