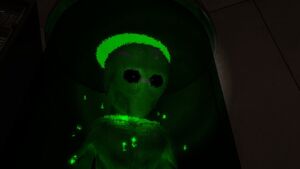 Likely fast considering how quick they get into and leave the player's kitchen.

This alien has a standard appearance to the common Grey Aliens: a Humanoid body with an enlarged head, gray skin, and large eyes. While never speaking directly, signal communication reveal their language similar to clicks and chirps.

Very little is known of their behavior, though they have been shown a stalking trait, as one of these Aliens can be noted to spy on the player within his own home.

The aliens arrived on Earth at an unknown time via a mothership wich they buried under the ground for unknown reasons. Ever since they have been terrorizing people across the planet, probing and experimenting on whoever they find. Sometime after that, the aliens abduct to coworker of the main protagonist.