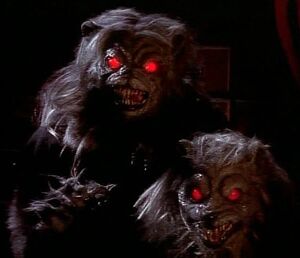 Monsters
These aliens are a sapient, spacefaring species of rat-like creatures. Despite their frightening appearance, they're actually friendly.

These aliens are mammalian creatures, resembling man-sized rats with long grey hair, sharp incisor teeth, whiskers, and bright red eyes. Their hands are five-fingered, including an opposeable thumb. The fingers are long, gnarly, and equipped with black claws.

The aliens' diet is omnivorous, including both slugs and vegetables, and they seem to have a particular fondness for cheese. They cannot survive more than a few hours in Earth's atmosphere, which is too dry for them.

The rat-like aliens are a spacefaring civilization with access to advanced technology, including devices that allow them to switch bodies with other creatures. They practice a form of interstellar tourism which consists of swapping bodies with natives of other planets for some time. Due to their benevolent nature, they follow strict codes of conduct and always see that no harm is done to the natives during the time. They would never dream of hijacking another body permanently, not even to save their own lives.

The aliens' family structure is similar to that of Humans. They form monogamous pairs and practice parental care. They have children in litters and raise them in nests. Grandparents continue to be in contact with their grandchildren. Their homeworld has green twilights and multiple moons, and they enjoy burrowing for slugs in the leaf mold.

Retrieved from "https://aliens.fandom.com/wiki/Alien_(Parents_from_Space)?oldid=190367"
Community content is available under CC-BY-SA unless otherwise noted.