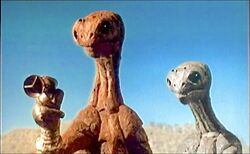 Laserblast
These Aliens are a sapient alien species.

The aliens themselves are fairly taller than Humans, standing at an estimated eight to nine feet tall (~ 2.4 - 2.7 meters). Their skin varies to numerous shades of brown to gray, though it's unclear if this is racial or sexual dimorphism at display, if any at all. Their heads are small and rounded, many witnesses comparing their heads and necks to that of tortoises.

Little is known about their race, but evidence suggest they act as "law enforcement" in the galaxy, troops following under galactic law. If any other race is shown defying such laws, the main cause of action is extermination, but they don't seem to have any interest in domination or takeover, luckily.

Most individuals typically aren't clothed, but they do possess slight armory around their chests, arms, and legs.

The Aliens are a spacefaring civilization, and are highly advanced. They possess numerous forms of weaponry that both mirrors, and exceeds much of Human weapons. Amongst these includes close-combat switchblades, and long-distance laser pistols that can disintegrate an organic lifeform in matter of seconds.

The most prominent weaponry studied is an arm laser cannon, which itself is capable of mass destruction when combined with their "pendant". While it is presumed the aliens themselves can operate it without issue, it has shown a diverse effect on other lifeforms. The individual under the effects will experience the following:

These effects aren't known to have a cure, and presumably is the main reason why the Aliens hunt down those that are in possession of such items.