Alien Species
Register
Don't have an account?
Sign In
Advertisement
in: The Thing Universe, Sapient Species, Unnamed Species,
and 13 more

"But what if one of you is the monster?"
―Inspector Mirov 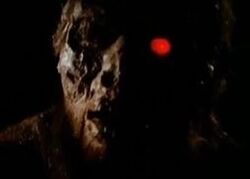 The alien inhabiting the body of a mummified anthropoid.

Unknown world in another galaxy

Horror Express
These unnamed aliens are a sapient species of energy-based life forms from another galaxy, which inhabit the bodies of organic creatures and absorb memories and knowledge from those they have killed.

A group of these creatures visited Earth in prehistory and one individual was left behind by accident. Over the next millions of years, the alien has inhabited the bodies of numerous life forms, ranging from protozoans to fish to primitive anthropoids, and eventually Humans.

These aliens are energy-based life forms which need to inhabit the bodies of other creatures to survive. Therefore, they can't travel through space by themselves and require spaceships.

It is possible for them to continue to inhabit a body that has been deceased, as long as it remains in relatively good condition. The alien who was left on Earth by its peers was discovered in 1906 in Manchuria, inside the body of a frozen mummified anthropoid, which had been dead for two million years, according to Prof. Alexander Saxton.

The aliens (and, by extension, those who are host to them) can kill other creatures by staring into their eyes in darkness. In dark environments, the eyes of the hosts glow bright red, and they can drain the minds of those they stare at. By doing so, the alien absorbs the victim's mind, including all their knowledge and memories. The victims are found dead with eyes blanked, and bleeding from the eyes, mouth and nostrils. As revealed in autopsies, the surface of the victims' brains lose all their wrinkles and become completely smooth.

When a host is no longer useful, the alien can simply transfer itself to a new host by making eye contact. In at least some cases, new hosts may develop some physical aspects of previous hosts, as exemplified by Inspector Mirov, whose left arm mutated into a hairy anthropoid arm reminiscent of the mummy's. In some cases, the alien is capable of reawakening and controlling the bodies of those it has killed, even if it's not currently inhabiting them. This ability, although seldom used (possibly it requires a lot of energy) allows the alien to control multiple bodies at once.

By transferring itself from host to host, the alien can live for millions of years; possibly indefinitely. It uses the host's eyes as means to record visual memory. When Prof. Saxton and Dr. Wells examined the eye of the anthropoid mummy under a microscope, they saw images of what the alien had seen over the course of its long life, including images of Mesozoic reptiles and even the planet Earth seen from space.