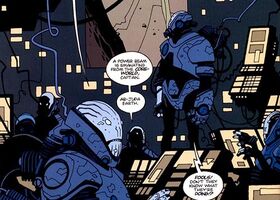 Mike Mignola
This is an unnamed, advanced race of aliens who watched the cosmic crystalline prison of the seven gods of chaos known as the Ogdru Jahad.

The aliens are humanoid, possessing grey skin and wear bulky armored suits. Their cranium appear to have some ridges that run down the tops of their head and possess flat faces and slits that appear to be nostrils. Unlike humans they appear to possess four fingers. At least one individual has show to be capable of altering their appearance via some sort of mental ability.

One of the aliens known as the Visitor was stationed on Earth since ancient times of the second race of man.

In 1944, the Visitor was disguised as an Allies soldier and was present when the Anung Un Rama arrived on Earth. With the appearance of the one who would destroy the world before him, the alien assassin discreetly took out his prism to eliminate the being, but stopped when Professor Trevor Bruttenholm urged the soldiers around him not to harm the child who he named Hellboy. Seeing that the humans could offer mercy to a monster like Hellboy, the Visitor reconsidered his order to kill the child. After separating from the Allies he reported his change of heart to his superiors that he could not kill the child even if he was the great destroyer. He believed that despite Hellboy's origins of being the son of a demon, he still had the blood of a human from his mother. For now Hellboy was an innocent and could not be blamed for the circumstances of his birth. His superior though that the Visitor's decision was too fastidious and urged him to complete the assignment and return to the station before they were out of range from Earth. The Visitor was steadfast in his choice and promised that if Hellboy turned to he dark he would corrected. For now the Visitor was allowed to remain on Earth and watch Hellboy develop secretly shadowing on his missions and defying his destiny.